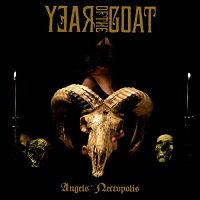 Along with Profound Lore, Van Records was largely responsible for breaking The Devil’s Blood to a worldwide audience. The small, very-cult German label wisely positioned the Dutch devil rockers as a mysterious body, sure to ignite the 70’s occult sound that hasn’t been much ado about anything since, well, the 70’s. It worked like a charm, obviously, and the band has since gone onto Metal Blade, where they’re basking in the glow of big-time promotion and international tour spots. Figuring to catch lightning in a bottle again, the label is trotting out Year of the Goat, a band that draws inescapable comparisons to The Devil’s Blood.

A Swedish six-piece, Year of the Goat employs virtually the same aesthetic as The Devil’s Blood both sonically and presentation-wise. While The Devil’s Blood has avoided clichéd candles and goat heads in their promotional pictures, Year of the Goat go full-bore with it, hoping to stroke those hung up on the Satanic tactics of Watain and vintage Mercyful Fate all it once. Moreover, the Swedes take direct cues from The Devil’s Blood production playbook, with that now all-too-ubiquitous analog sound filling the airwaves. Perhaps the only real difference is that there’s a dude fronting Year of the Goat, not some statuesque songstress ala F/TBD/MOS.

On their Angels’ Necropolis debut, the Swedes make good on a lot of the same dark promises TDB does, with a similar rock jangle (see: “Spirits of Fire”), mysticism (“Voice of a Dragon”) and proto-metal punch (“For the King”). The compositions are broad, however, and do a relatively adequate job of casting a succulent spell on the listener, in spite of its unoriginal nature.

By all accounts, The Devil’s Blood appear to be picking up speed, with last year’s (or was it this year’s?) The Thousandfold Epicenter still gaining traction across the globe. Therefore, now is the best time to piggyback off those guys, something The Year of the Goat has to be cognizant of. Their play to become the junior The Devil’s Blood is all over Angels’ Necropolis. So much for subtlety.