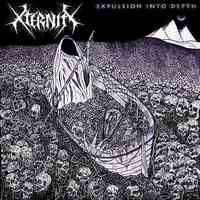 While Germany has always been synonymous with power metal, it seems the tides have been turning and they’ve been forming a formidable death metal scene over the past 10 years or so as well. Xternity is the latest German export, with Expulsion into Depth being their first foray into the full-length category after a demo and EP.

What Xternity does best is cull its influences from a diverse source without wearing any of them on their sleeves. Expulsion into Depth has elements of thrash, death, and a bit of black metal but they gel them together so well that it’s hard to really put a finger on what piece goes where. “Amok” carries an overly thrashy tone with some well-placed groove, but sprinkles in the ferocity of death metal with the riffs. “Area Horizon” puts a more melodic feeling into the band, with the closest one could come with finger-pointing in regards to a more Hypocrisy-esque vibe to the proceedings. “The Graveyard” nicely merges a number of these feelings together, offering some pummeling verses before veering into a more melodic chorus (without “cheating” so to speak). Rounding things out is a production that captures the more visceral bite of Xternity while retaining the clarity for the melodies to shine through.

Expulsion into Depth is a great starting point for Xternity. It sounds more akin to a second or even third album down the line, with says that there is plenty of potential to watch for as Xternity moves forward. There’s some excellent extreme metal to be found here.