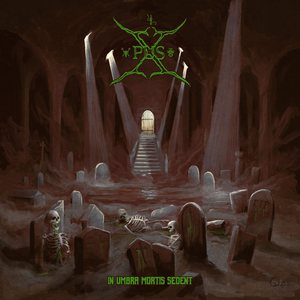 Do you like Incantation? Your answer to that question will undoubtedly influence your response to this release. Following up from their 2015 debut, Italy’s Xpus are back for a second go at retro death metal. In Umbra Mortis Sedent shows many of its inspirations on its sleeves, for better or for worse.

There’s no mistaking the Incantation influence that Xpus brings in with them. Everything from the speedy, blastbeat-driven moments to the oppressive doom elements are there. The vocals even have that upfront, Craig Pillard-esque rumble to them. But in all fairness to the band, there’s also some Morbid Angel and Deicide influences to be found along the way (not to mention some subtle black metal nods), so it’s not a complete worship of one act. To be honest, many bands have been falling into the retro death trap in recent years, and have found some degree of success with it. What hurts Xpus is that even after listening to the release almost ten times over, there’s really nothing that sticks out and makes the listener want to return to it. Sure, the tempos vary as already described and it’s definitely heavy in all the right ways, but there’s just not a lot of riffs that this scribe finds compelling. Xpus have due diligence in their respect for the bands noted above, but the end result just feels a bit bland in comparison.

While there’s nothing ‘wrong’ with In Umbra Mortis Sedent, it fails to deliver many standout moments. Despite the retro death metal love, it lacks the urgency and compelling nature of other like-minded acts and ends up falling a bit flat in the long-term because of it.