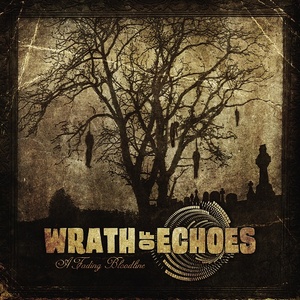 Oftentimes the best way to keep the darkness at bay is to embrace it, a theme that is common to many doom metal bands. Particularly the doom/death variety, that establish a bleak yet somehow inviting version of dark and morose feelings that allow the listener to lose themselve within them. The young upstarts from Quebec in Wrath of Echoes already have a solid grasp of this for their first effort in A Fading Bloodline.

You can draw comparisons to the larger bands of the genre, of which Swallow the Sun and Daylight Dies are an instant sonic reference point. There’s the same level of brooding atmosphere, melancholic riffs, usage of strings and keys, and growled and sung/spoken vocals that you’d expect to hear. But there’s also something just as compelling about the album when you listen to it as a whole. All of the familiar elements don’t work against the band, but rather for it. The lurch and crawl of “Weight of Time” crushes with intensity (and some Katatonia-esque melodies) and the somber yet uplifting riffs of the title track never fail to hit their mark. The band gets their heaviest point across with “The Asphodel Meadows,” a track that goes more into oppressive riffs but never too much so. The keys/strings are used to enhance the mood of the tracks, rather than take them over completely, making the bleak feelings more palatable. The only thing negative to remark is that without counting the intro track, there’s only a mere four songs to languish in.

Somewhat familiar in tone to the big names, it’s also given a bit of a pass considering this is the act’s first release. They’ve now established that they can pull off the same level of melancholic darkness as anyone else, so with any luck, Wrath of Echoes next push will be to further move into more unique waters.