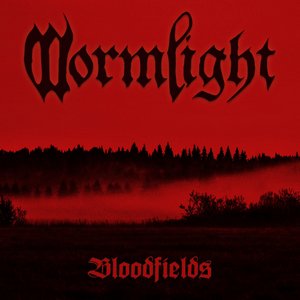 Lots of changes going on within this freshly formed Swedish black metal act known as Wormlight. First off, Bloodfields was initially recorded, the band was known as Unhallowed. The band also picked up a new vocalist after the recording, Tiamat Invictuz. So when Black Lion Records signed the act and gave the EP a reissue, the band re-recorded the vocals on two songs to give listeners a fresh take before their 2017 full-length.

Wormlight plays a flashback form of melodic black metal, which will bring you back to the ‘90s Scandinavian scene. The cold, icy atmosphere, the melodic solos, and razor-sharp tremolo riffs are all here (along with plenty of blastbeats) and done in such a way that you can tell the band takes influence from said genre, but didn’t feel the necessity to lower their production values back to that time. Instead there’s a more crisp feel here while retaining the needed raw elements. Likewise, while they keep the melodic/frantic aspects of the ‘90s black metal scene, they eschew the keyboard angle and rightly give the album an increase on the brutal end – there’s no reliance on synth to convey the blackened vibe. That falls upon the guitars to deliver some strong melodies, and they do pretty well in this area. Tremolo-picked melodies at a galloping pace fill “Towards Impious Domination,” for example, which is also enhanced by more brutal riffs that still retain some catchiness to them. In comparing the vocalists, Invictuz has a more brutal range than his predecessor, and does seem to give the music a darker (and more enjoyable) feel to it.

Playing to a familiar format, Wormlight are off to a good start with Bloodfields. After two EPs, the test will come with next year’s full-length, but those looking for the good ole days of Swedish melodic black metal without a total retro production should find plenty to enjoy.