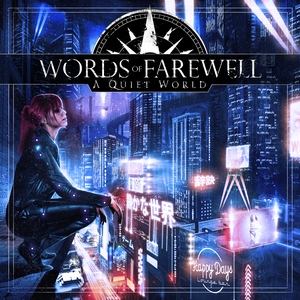 Finding a new melodic death metal band is often a fun trip on a personal level, but more so when you find one that somehow eluded your grasp for a few albums. A Quiet World is the third full-length from Germany’s Words of Farewell, who have been consistently firing them out since 2012. Nestled snuggly into the progressive and melodic realms, it’s an album with some surefire appeal to those keen to the Scandinavian varieties of death metal.

First things first, it’s pleasing to hear a melodic death metal band that has a more modern tone while avoiding the clean vocal chorus syndrome that many of these bands like to occupy their time with. While it means that A Quiet World doesn’t have any immediate vocal hooks so to speak (not that there’s anything wrong with the growled vocals here), it allows more time for the guitars and synth to get some attention. Melodies that may have a familiar tone to fans of Omnium Gatherum or Scar Symmetry, but are no less effective because of it. “Oversoul” for instance, has its fair share of elevating keys while the guitars deliver melodies drenched in just the right amount of sorrow and elation, alongside a standout progressive solo partway through the track. Moreover, some of the melodies are layered and nuanced enough that they reveal themselves over time, with additional listens. Lastly, there’s some direct heaviness to counter some of the melodies, with some songs like “Zero Temperance” having a more distinct crunch to them to add variety.

Occasionally heavy (but not too heavy per say) and full of catchy melodies, A Quiet World satisfies the “third time’s the charm” adage. Some easy appeal to the melodic death metal fans, regardless of which country of origin you prefer (Swedish/Finnish) – Words of Farewell represent the complete package.