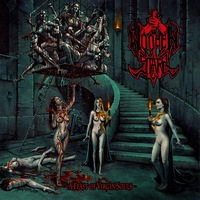 Inspired by the always-usable story of Countess Bathory (she of drinking virgin’s blood for eternal life fame), Wooden Stake’s A Feast of Virgin Souls is, as the cover suggest, somewhat of a lo-fi, totally vintage offering that combines the occult feel of 80s death and black metal, along with some interesting vocal cracks from Vanessa Nocera. The album is almost too by the book sometimes, however, clinging to a rather standard mid-range in most facets, including the riffs and vocals. Guess that’s what the interesting album cover is for…some spice.

Nocera, along with her partner in crime Willie Wardlaw (drums and guitars) have properly stoked to the grim production line. The album’s raw tone would make adequate due along the same path that Bathory, Celtic Frost, etc. and gang were so privy to in their heyday. Therefore, it’s with little surprise there’s supple occult lift-off on “Rise From the Bleeding Coffin,” or “Dragged Through the Rotted Catacombs,” which is probably Wardlaw’s best segment of riffs and guitar ideas. (It should be noted that a hefty portion of the album’s riffs and solos are primitive.)

As for Nocera, she’s easily the best thing Wooden Stake has going for itself. Her vocal stylings are both subdued and mystical at times, which comes in handy across the sprawling title track and excellent “Hanging from the Inverted Cross,” which emerges as the album’s most enjoyable cut. Moreover, Nocera seems to have developed her own style, a ripe cross between a demonic growl and airy clean vocals. Therefore, push those elements to the front, discard some of the album’s more rote elements, and cast Wooden Stake as an American occult doom/death ensemble worth giving a fuss about.