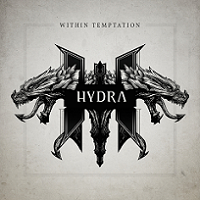 At least female-fronted symphonic metal bands don’t hide their aspirations for the next level. You know, stadiums, ego-ramps (seeing Sharon den Adel on one wouldn’t be a bad sight), high-production videos, so on and so forth. The prime band in this realm is Nightwish (duh), but Within Temptation have positioned themselves for broader appeal with Hydra, an album with crossover potential over there (read: Europe), but not here in the States. There’s no way millennials are going to fancy metal/hard rock of this type, even if there’s a rapper on the darn thing…

No concept this time out ala 2011’s The Unforgiven (and no dance number like the fantastic “Sinead” either), so the band has strategically placed a handful of notable guest appearances across the album. The obvious being Tarja Turunen on “Paradise (What About Us?) where she duets with den Adel for a stuffy, but enjoyable number. Former Killswitch Engage throat Howard Jones jumps in on “Dangerous,” a zippy Euro/power cut, complete with accompanying Red Bull-inspired (!) video. But it’s the inclusion of rapper Xzibit on “And We Run” that will probably draw the most ire. A song prime for Eurovision, it’s laced with the usual den Adel vocal acrobats (lots ‘o layering), yet the rapping somehow fits, even though it’s a guaranteed turn-off for close-minded individuals. But hey, can’t fault the band for wanting to broaden its scope. (Soul Asylum’s Dave Pirner also appears on “Whole World is Watching.”)

The tender balladry of “Edge of the World” is naturally pouty, while the steely “Roses,” and heavy lushness of “Tell Me Why” boost those springy chorus sections, things that have become an entity onto themselves with Within Temptation. So in essence, here’s a band pretty blatant in its pursuit of taking the commercial leap while hanging on to the intrinsic metallic elements they’re essentially built upon. Had another band attempted this…we know what the results would be.