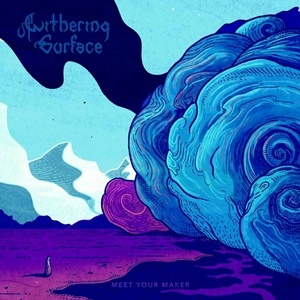 Many ardent followers of melodic death metal may remember this Danish act Withering Surface first active during the 1990’s. They would release four albums on various European labels – the last of which Force the Pace on Scarlet Records signaled the end of their initial era as a group. Reuniting in 2019, the fifth album Meet Your Maker comes out on vocalist Michael H. Andersen’s Mighty Music label that he co-owns. Bassist Jesper Kvist is the newest member, but most of the sextet have been around in one form or another throughout the earlier productivity – ensuring that this is a rebirth with the proper intentions creatively and not ‘cashing in’ for nostalgic reasons.

What immediately captures attention is the lower, raspy roar of Michael as a vocalist – his range and delivery possessing just the right razor edge with a bit of that Sodom/Celtic Frost intensity to stand out perfectly for these tracks. There are plenty of catchy riffs and stunning lead breaks that deserve deeper dives on headphones – “Raised Right” and the blitzkrieg up-tempo follow-up “Alone” two stunners early on that should shake the rafters while causing adrenaline-fueled madness. Twin guitar activities throw down a bevy of old school tricks while the rhythm section handles the death/thrash and groove transitions as seasoned pros – “In a City Without Soul” swaying between some tremolo-fueled picking against solid snare/double bass mechanics to create this melodic death and slightly evil ambiance with the keyboard work of Morten Lybecker an extra atmospheric layered texture. It’s important for this genre to never remain stuck in one gear, and Withering Surface know how to remain aggressive and keep the riffs/hooks flowing – “Leaves in the Stream” another faster-paced outing with a surprisingly endearing chorus, while the 6:19 “I’ll Soon Be Gone” delves into a doomy, almost semi-ballad template, featuring some spacey clean vocal melodies in spots and remarkable, emotive lead break trade off activities before ramping up the speed and heaviness midway through.

At nine songs and 43 minutes, Meet Your Maker never overstays its welcome, which is refreshing as often first albums back after a prolonged absence from a veteran group can be packed to the gills with every idea under the sun to max out certain physical mediums. The band embraces a melodic death/thrash mix with controllable hooks and fantastic songwriting abilities – so those who love the band or the Scandinavian movement in general from the 90’s/2000’s will be quite satisfied here.