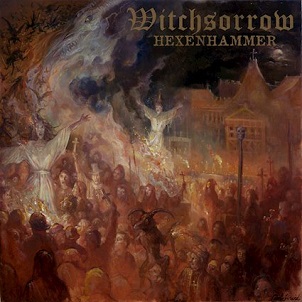 An easy doom “layup” if there ever was one, Witchsorrow wear their influences on their sleeve like a regular punter decking out his (or her) jean jacket with patches of their favorite metal bands. Formed in Hampshire, England in 2005, Witchsorrow was snapped up by no less than Rise Above Records, the label led by former Cathedral throat Lee Dorrian, who is about to be name-dropped a bit more throughout this ensuing review. Hexenhammer marks the fourth full-length for the Brits, following up 2015’s No Light, Only Fire.

The reach out for Witchsorrow only extends to prime, no boogie era Cathedral, which probably puts them at anything before Supernatural Birth Machine. Toss in the perfunctory Sabbath nods and bows and there’s your record, a plodding, doom-over-again affair that eats directly from the palm of the two aforementioned bands. Vocalist Necroskull effectively copies a great deal of Dorrian’s vocal lines, bordering on thievery, but always in or around the mark, as evidenced by the title track and “The Devil’s Throne,” which ambles and moves its way into semi-interesting mid-tempo territory.

Sure enough, the seven songs here (the opening instrumental doesn’t necessarily factor into the equation) all attain the fundamentally sound British doom lurch, while also sounding rather tired and unmotivated. Like, it’s bad enough already that Electric Wizard can’t be bothered to come up with a new riff; Witchsorrow not being too far off is also an issue, especially for a band that is now caught in the slow-moving underground metal queue. Sure, yeah, doom is alive and well over in Hampshire, but don’t press Witchsorrow on the matter — Hexenhammer is devoid and dull.