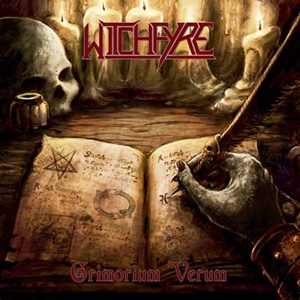 With a name that screams metal, Witchfyre from Spain reside in that speed/heavy platform for their first full-length Grimorium Verum. Together since 2011, the quintet has released a single and Legends, Rites and Witchcraft EP follow-up, but remain dormant on the studio front for four years until this. Brandishing stage names like J. Thundervil. P.G. War, and Emi Metal to name a few, it’s easy to assimilate an affinity for the old school scene, and you would be right as you take in these eight tracks. Wielding thunder and lightning through a bevy of 80’s influences, there’s no denying the sincerity of these melodic arrangements that are as heavy as they are emotionally connective.

A demon-esque narrative passage opens “Devil’s Child”, the first foray into spiderweb twin guitar action along with furious double kick support – the type that put Iron Maiden on the map a la “Phantom of the Opera”. Stretching occasionally into the early glam/melodic hard rock arenas for specific licks and hooks as in the Accept meets Mötley Crüe-oriented “Night Hunter”, Nightfyre aren’t afraid to mix up longer, epic-style numbers against the shorter anthems – the former opening up some engaging march moments for the bouncy “Lord of the Underworld”, the gang-like background vocal support giving off a Running Wild vibe against the normal banshee-like falsettos of Emi Metal that are equally cut from the King Diamond cloth as they are Sebastian Bach or Enforcer’s Olof Wikstrand. Evil triad combinations during “Behind the Wall” create this dark mystique that differs from the average speed/heavy metal band – making this one of the best cuts at track five, combining European finesse with American power. The production values mirror that old school ethos – it’s solid without being over-processed, and thankfully even the drum sound isn’t digitized or triggered to death.

Yes, you can expect the left-field accented awkward verse that could leave you scratching your head a bit (“Queen of the Night” here), but the sterling guitar melodies and steady musical chemistry trumps any small misgivings. Grimorium Verum has the spirit of 1983-1985 in full effect, back when Mercyful Fate, Running Wild, and Accept took that NWOBHM template to their own direction – and as such makes for a devil’s horns approved, denim and leather extravaganza.