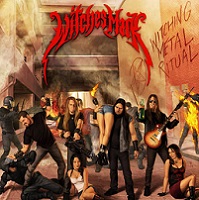 Texas four-piece Witches Mark carry on the fine tradition and spirit of early 80’s U.S. metal with their debut album Witching Metal Ritual. Remember the days when you could see the album cover, put the needle down on your turntable, and just know that a series of songs would penetrate your body with skull crushing riffs, explosive tempo energy, and piercing/ shrieking vocal mania that screamed for the cause through and through? Well these eight songs live, breathe, and spit fire and fury all in the name of metal.

You’ll leave with neck whiplash after hearing the Mercyful Fate meets early Slayer-esque riff parts for “Swarm,” or feel the frantic Venom screams and Agent Steel speed for opener “Bringers of Heavy Metal Death” with singer/guitarist Robb Bockman and fellow growlerguitarist Robert Williams tickling the aural chill bumps with their sneering tones. “We Die” contains the right amount of evil keyboard refrains against the doomy/ traditional riffs, a song we would expect from a lot of the U.S. brigade in the early Combat/Metal Blade years.

Purists may scoff at the organic nature of the production – but therein the charm begins for Witches Mark. Metal inherently shouldn’t be a cut-and-paste affair compressed to razor precision- at the core the movement has been about expression, feel, creativity, and strength. Witching Metal Ritual brings those years of 1983-1986 back to a new generation, and guest appearances by Jack Starr, Ross ‘The Boss’ and Jason McMaster only add the cherry on top to an already appetizing full course offering.

Raise your sword to the sky. Witches Mark remembers the early metal movement and create an infinite number of head banging moments with Witching Metal Ritual.