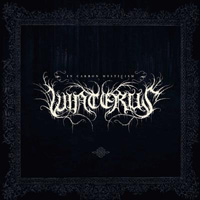 A bit jumbled this one, probably because Winterus aren’t even two years old and when bands are in such a nascent stage, mistakes are bound to be made. A label as well-respected as Lifeforce should have caught certain errors, like the fact there are four instrumentals out of the nine songs and the “live” recordings are of immensely poor quality. Then again, that’s what Winterus could have been going for on their debut, In Carbon Mysticism. This is “necro” black metal, after all.

Essentially an America take on Norwegian black metal, Winterus (who are from the non black metal-sounding land of Kalamazoo, MI) run the through gauntlet of the usual (and expected) BM sound elements, including fast tremelo-picked riffing, manic blast beats, and raspy vocals. It’s totally reminiscent of what went down in the mid-90’s and Winterus do a remarkable job of recreating it.

Obviously, the instrumental tracks are going to leave some people scratching their heads, specifically “Moonlust,” which begs for vocals. Strange thing is, black metal is probably the easiest style of music to drop vocals in. Nevertheless, some haunting moments emerge during “Reborn” and album highlight “Eternal Ghost,” which gives credence to the notion Winterus are capable of evoking the mystical atmosphere their influences were so apt at creating.

Methinks once Winterus get their feet settled, some quality control will emerge from both their camp and Lifeforce. Unless there is a really good reason (read: the lyrical well ran dry), then having nearly half of your debut album comprise of instrumentals is not a good idea. Outside of that, there’s some promise shown on In Carbon Mysticism, so we’ll cut them slack and give these gentlemen the benefit of the doubt.