WildeStarr – Beyond the Rain (Scarlet Records) 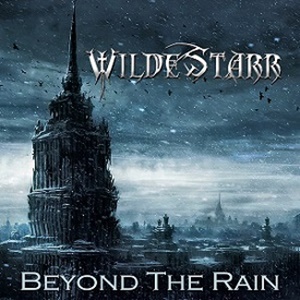 Featuring ex-Vicious Rumors bassist Dave Starr (who also plays guitar in the band), WildeStarr sits in a melodic power metal stance for their third album Beyond the Rain. Working with vocalist/keyboardist/ wife London Wilde and drummer Josh Foster, the five-year break between albums seemed necessary as a band relocation from CA to TX plus Wilde needed time to come to terms with her brother’s passing as the last album A Tell Tale Heart hit the streets. Musically WildeStarr comes from a throwback 80’s platform – a US metal style when bands like Savatage, Dio, and early Queensrÿche gained attention because of elevated singer/guitar salvos and diverse arrangements that were heavy, catchy, but often delved into out of the darkness into the light themes.

Unsure how to get the disappointment out of the way, but the drum sound for these nine tracks is basement or pre-production/demo quality at best – the tin can snare snap especially doesn’t do justice to Josh’s obvious tempo/groove skills throughout. The riffing and harmony aspects shine – WildeStarr aren’t necessarily very fancy with their songwriting, instead preferring to let the segments flow in a logical melodic/traditional manner. When you have a soaring, multi-octave voice like London fronting the group, it’s best to let her take the reigns – her screams and vital emotional grasp of metal shouldering the aural load, most evident on highlights such as “Rage and Water” as well as the semi-ballad follow up “Crimson Fifths”. We get some vestiges of classic Vicious Rumors in spots of twin guitar layers, as well as natural, almost doomy riffing that works hand in hand with the conceptual lyrics, many coming from London’s deceased brother’s journals. It’s hard not to be swept into the Savatage-like crunch and slower, double kick work for the title cut – while “From Shadow” is another heads-down anthem for old school maniacs to treasure.

You can close your eyes and feel as if it’s 1987 all over again for Beyond the Rain – let’s just hope for a stronger production emphasis for the follow up as the talent demands to be heard in proper context.