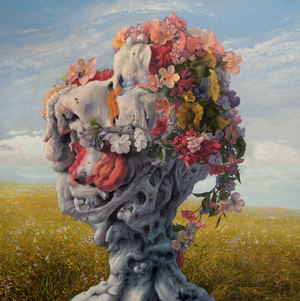 Coming four years later than their impressive sophomore effort, Sleep at the Edge of the Earth, New England’s Wilderun have returned with yet another magnum opus in the form of Veil of Imagination. As Sleep saw the band start to embrace some ideas outside of the folk metal realm of their debut, Veil of Imagination really sees them toss the book out the window as they continue to sonically better themselves and make the leap to the next level.

That’s not to say that Wilderun sound completely different on this release, because there are definitely some very ‘Wilderun’ components that will very much appeal to anyone who checked out their previous releases. That adventurous, and almost whimsical sense of joy really launches out at the listener – Wilderun have been masters of making you really smile when you hear certain moments, and this album showcases quite a few. The well-chosen pre-release track of “Far From Where Dreams Unfurl” is a metallic ball of joy that captures the band in their natural, upbeat and triumphant flair as they craft perfect build ups within the track and then unload a potent climax that will send shivers down many spines with some stunning guitar melodies. This of course, includes Evan Anderson Berry’s fantastic clean vocals as well, which have gotten even stronger since last time around.

The spots that seem different have to do with the band’s more progressive side, and it’s all done in strength for the act. The heavier parts sound quite massive, with coarse growls and thundering riffs – made noticeably more destructive by the production work. The songs, have found a way to get longer without sounding overly so or pretentious. Instead they weave more of an elaborate tapestry that begs to be listened to over and over again, despite the 68-minute runtime. There’s even more of a cinematic and grand scale to everything (which says something due to the presence Sleep already possessed) and the orchestrations are decidedly potent. Plain and simple, there’s just a lot of dynamics as each track progresses, even with the two shortest tracks (which are arguably extended intros and outros of “Far From Where Dreams Unfurl”) displaying a lot of detail in the way that they are arranged and allow for the build-up of moods of wonder and reflection. It’s exciting to just listen to a track like the 15-minute opener “The Unimaginable Zero Summer” and observe the way that it twists and turns, zipping from moody songbuilding into blast beats, leveraging impressive heaviness and countering it with an almost ethereal beauty while masterfully trading off between the two.

Veil of Imagination is an album to really sit back and listen to with an open ear. Wilderun have become exceptional composers in this regard, and to take it all in over the course of a few listens is only the beginning of a journey that rewards patience and focus. While it can be soaring and jovial, the band has added a stronger sense of adventure and the willingness to explore in more dynamic directions – be they heavy or mellow. Without a doubt another album that will have many singing their praises at the end of 2019. Stunning and gorgeous material.