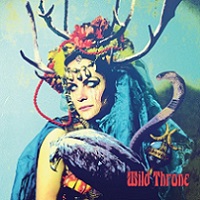 The artists formerly known as Dog Shredder have become Wild Throne, a wise name change given the audacity of their previous moniker. Animals = always a touchy subject, unless you’re Cattle Decapitation, but we know where those lads are coming from…Anyway, the first release since the band’s name change is the Ross Robinson-produced three-song Blood Maker EP, a multi-faceted, elastic release that jumbles post-rock, progressive, and even some Mastodon-like leanings.

The prerequisite with Robinson (whose previous credits include Korn, Machine Head, and Sepultura) is usually emotion and intensity over technical ability. Nowhere does Wild Throne make inroads to the raw and stripped-down forays of Robinson’s prior works (this isn’t 1997), so the broad guitar jumps and elaborate playing of drummer Noah Burns provide the wide-angle needed to convey the band’s dynamic scope. Cuts such as “Shadow Deserts” and “The Wrecking Ball Unchained,” may not have an obvious median, yet they tuck in enough slippery riffs and sing-scream vocals (courtesy of Josh Holland) to make Blood Maker digestible.

A regular conundrum with bands like Wild Throne are whether they can maintain the same pace over the course of a full-length, something that might not be figured out with Blood Maker. But, the gist of the matter is understood with Blood Maker, that a band re-branded and in cahoots with one of nu metal’s primary conspirators isn’t all that bad after all.