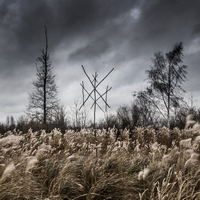 Wiegedood is Dutch for SIDS (Sudden Infant Death Syndrome), and it’s also the name of a strong new Belgian black metal act out of Ghent, East Flanders. Activated in 2014, this trio has quickly released their debut album with De Doden Hebben Het Goed in May of 2015, and it’s a release that merits a listen.

Not so much in the vein of the raw and bestial black metal that traditionally calls Europe home (and thus we’d think of as traditional black metal these days), Wiegedood plays in the same ballpark as some of the great bands coming out of the UK as of late, namely Winterfylleth and to a lesser extent Wodensthrone. Which is to say, the band play a black metal that is rich in texture and atmosphere – dynamic and melodic.

A four song album comprising thirty-eight minutes, the album is bookended by the two long passages on the record. With all song titles in Dutch, it can be presumed that the lyrics also follow suit – the tortured screams of bassist/vocalist Levy Seynaeve likely not immediately intelligible in any language anyhow (as with most of the genre). Where this band can stand apart from other new black metal acts lies in their precision and clarity of sound. While the album is evenly interspersed with slower sections which create the dynamics and build the moody tones, there is present a pretty relentless fury of blast and whirlwind tempos that have the album sitting on the faster side of things in the long run. The clean production values let the instruments shine, guitars ranging from acoustic pickings to the dominant tremolo riffings of skyward-reaching melodies and ground-rumbling heaviness.

As depicted in the striking and cool album art, the band evokes a pagan black metal sound, bringing cloudy skies over pastoral European lands to mind. This is an impressive debut album and in the end, while true memorability might elude De Doden Hebben Het Goed, there is little doubt at all that the potential for a stellar follow-up is there. A band to keep an eye on for sure, Wiegedood could make a name for themselves.