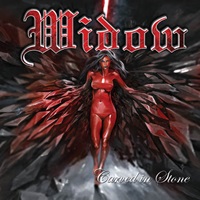 A staple of the underground metal scene since 2000, North Carolina’s Widow deliver an old school metal platform with traditional and neo-classical nuances without sacrificing their meat and potatoes songwriting approach. Five years removed from Life’s Blood, the band hasn’t been idle – gaining ground in the US through an early spring 2014 tour excursion opening for Destruction, as well as finally solidifying new drummer Robbie Mercer in time for this fifth full-length Carved in Stone.

Speaking of time, that particular theme comes up frequently in Widow’s song-titles – the steady mid-tempo churning “Another Time and Place”, the acoustic-oriented ballad “Time on Your Side”, and the follow up NWOBHM meets Sunset Strip send up “Borrowed Time”. Bassist John E. Wooten IV has one of those naturally higher registers that allows his delivery to go down a storm with people into King Diamond and Leatherwolf as much as say Van Halen or Kiss – seething in retro-attitude for “Anomaly” where Chris Bennett’s chord sequences exude Priest class. He chooses to show off more of his neo-classical licks and tricks during many solo segments, obviously attuned to the work of greats like Rhoads and Malmsteen. Vocal harmonies during the chorus provide an easy gateway to songwriting retention for Widow – and this record comes up with a couple of winners in this regard, most notably “Live by the Flame” (think Leatherwolf here) or the storming closer “Let It Burn” where early Def Leppard careens headlong into some Dio-ish riffing.

Yes, there is a lot of old school references here – and fortunately for us, Widow piece things together in a professional manner that they firmly establish their own style without directly borrowing or lifting from these camps. A very raw, primal production devoid of extensive sampling or programming help gives Carved in Stone that organic power to allow you to feel the snare, double kick, bass, and electric guitars charge through your speakers – very lively and close to what we would expect on stage. Much like Cauldron, Widow assaults you with a feel-good brand of traditional heavy metal that forces maximum head banging and takes all the mothballs out of your favorite denim or leather apparel. Carve this in as Widow’s best to date. 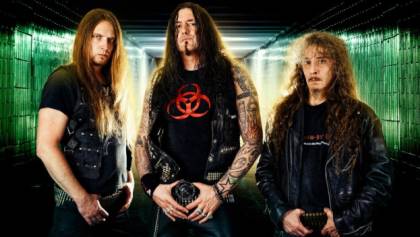 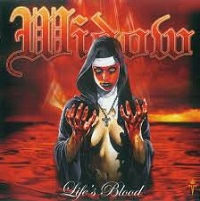