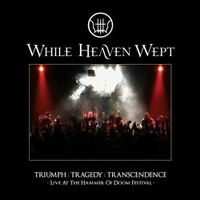 It’s an utter crime to label these guys as doom, ‘cause there so much more to them. Like, so much more. One of the more cult and widely-respected American metal bands of this era, While Heaven Wept have enjoyed a rash of productivity of late after the release of their gigantic Vast Oceans Lachrymose last year. Only fitting the band follows it up with a live set, aptly titled,Triumph: Tragedy: Transcendence – Live At the Hammer of Doom Festival.

As live sets go, this seven-song offering lends a little more organic and wide feel than most, a credit to founding member/guitarist/stickler for details Tom Phillips. The band’s expansive, oftentimes grandiose sound is not lost in translation, rather, it’s big enough to fill several soccer stadiums, but is just right for a doom festival in Germany. And that’s probably the most misleading tag here – WHW is too melodic, too symphonic for the doom tag…all in the ear of the beholder, methinks.

Short songs these are not, rather long and momentous journeys, especially “Thus With A Kiss I Die,” the band’s signature song, which is loaded with swooning guitar melodies and several daring crescendos. Singer Rain Irving does his part, with some beautifully-sung portions on the brilliant “The Drowning Years” (probably the band’s best song) and sing-along “Vessel,” which involves a few frog-throated Germans in the front row during the chorus.

The air of quality to this is unmistakable; While Heaven Wept are widely-respected for a reason. Their oftentimes weighty and challenging songs translate quite well in the live arena, the type of songs where the concert-goer can just drift away, soak in the sounds, nurse a few beers, etc. If one thinks the title of Triumph: Tragedy: Transcendence – Live At the Hammer of Doom Festival is pretentious, then you don’t know this band. This is bold and beautiful stuff, man.