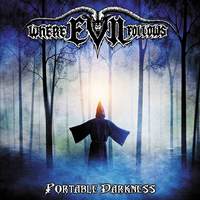 Onward were an up-and-comer who never quite got their due in the early 00’s, still have some resonance in traditional American metal circles, especially guitarist Toby Knapp. Knapp, who we’ve covered previously for his excellent one-man black metal Waxen outfit, has taken it upon himself to continue Onward’s legacy after the untimely passing of singer Michael Knapp. Re-branded as Where Evil Follows, Knapps has recruited former Into Eternity touring singer Dean Sternberg and has kept the classic/traditional power metal sound in check on the band’s debut effort, Portable Darkness.

The rather noticeable drum machine may be a turnoff for some (and a little distracting), so buyer beware on that front. But, Knapp’s playing is as fluid and multi-faceted as ever, especially when he combines the finger fury of his Shrapnel days with melodically-infused numbers ala “They Came for Us,” and the heroic “Oppressive Grey.” And Sternberg is a viable commodity on vocals, possessing an upper-tier range, along with some reach-backs into the age of high-wire vocalists, as found on “Reborn,” “Lifting the Veil,” and a sturdy cover of Black Sabbath’s “Disturbing the Priest.” (Kudos to the band for trying a Born Again-era song, too.)

Knapp seems to have developed his own segment of followers based upon his solo and Onward work, so something like Where Evil Follows should land just fine. Certain budgetary restraints may have forced the duo to go with the drum machine, but such things can be overlooked in light of Portable Darkness’ well-balanced attack. Plus, Knapp totally excels in this spectrum. Hard for him to goof something like this up.