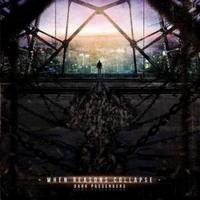 The way that some bands have tended to blur the lines between different genres seems to be the best way to go. Take some of the best bits from a number of different styles and set them up in a way that doesn’t seem clichéd or bland. When it comes to France’s When Reasons Collapse, it seems that they are half way there to this end.

The band’s first full length (and first new material since 2011), Dark Passengers does a good job of varying the musical styles. You’ll find bits of death metal, progressive, metalcore, and a couple others as you make your way through the album. There’s not really much to fault with the approach. The aggression the band achieves between the death and metalcore angles is admirable, and all of the tracks show the band with their fangs exposed. The riffing is energetic and Cristina’s vocals are as venomous as needed. Even the 44 second intro plays to the band’s strength and gives you a good idea of what you are going to get as it transitions into “No Time for Regrets.” However, that also is the problem with Dark Passengers. Despite an effective job of genre-blurring, the approach to each track does not vary and by the end of the disc, much of the album seems hazy. More tempo changes could really make a difference here, instead of relying on what seems to be a shift back towards blasting speed in each track.

If you take a track individually, things are looking pretty good for When Reasons Collapse. But when each is looked at in the context of the whole, Dark Passengers suffers a bit in the long run. This is easily fixable, and with any luck the band will rally the troops, so to speak, and some varied tempos could bring this band closer to making name for themselves.