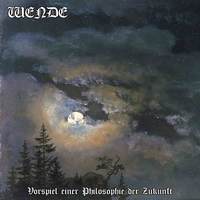 Burzum worship, as we’ve come to know, was perfected not too long ago by the Ukrainian force that is Drudkh. Anyone else giving it a go…it’s somewhat pointless. Yet there are those who will still try to recreate the hallowed sounds of Varg circa early 90s; the shrieks of desperation, the indomitable, cold riffing, and, the unyielding atmosphere. In reality, Burzum were so good in their short-lived heyday that it’s next to impossible recreate what once was, which puts U.S. black metal contingent Wende and the reissue of their 2011 Vorspiel einer Philosophie der Zukunft debut into the take it or leave it category.

Comprised of one member (Zamiel), Wende certainly doesn’t sound like an American black metal band from the Pacific Northwest. A lot of the production values are snagged right from the studio floors of Grieghallen, which is where virtually every seminal Norwegian black metal album was recorded in the early 90s. Thus, the surly, but ominous riff couplings found on opener “Der Ritter,” as well as the well-paced, bleaked-out “Nichts und Schönheit” would readily be confused with being an album from that era, if not for the fact it was recorded in 2011. Such things invariably are of little consequence as the album starts to take shape, where elongated atmospheric/keyboard-laden tracks mix in with traditional fare. Just the way ‘ole Varg would have done it.

The regular knock on USBM is that it has failed to forget a convincing identify for itself. The Cascadian scene, it seems, has (thankfully) come and gone, leaving the cupboard bare yet again. So with homage-paying material found across Vorspiel einer Philosophie der Zukunft, it’s apparently better for a band like Wende to ape what is familiar, than try to blaze their own path.