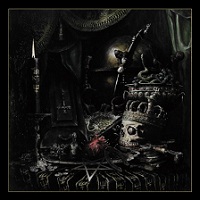 Without much of an equal or even a parallel in the 2013 black metal sphere, Sweden’s Watain stands alone in their pursuit as being the by-the-book, be-all, end-all BM band. They certainly look and act the part (pig’s blood anyone?), yet it is their diabolical blend of searing Scandinavian sounds with feverish melodies that at the present time, places them head and shoulders above the rest, and in league (with Satan) with the Norwegian 90’s crew, who remain steadfastly unproductive. The Wild Hunt is a distinct step up from 2010’s maniacal Lawless Darkness, going as far to add new, devilish wrinkles that are pulled off with ease.

The “wrinkles” entail the much-discussed “They Rode On,” the band’s first legitimate departure track. Essentially a black metal ballad that laments like an old country western song, “They Rode On” is as definitive – and satisfying of a statement the band has made to date, showcasing versatility that many thought didn’t exist. While the traditional rumble and flair of “De Profundis,” “Black Flames March” and rabid “Sleepless Evil” are sure-fire live cookers, it is the instantaneous “The Child Must Die” and sprawling title track that resonate the most.

Watain has progressed rapidly through the black metal wasteland, portraying themselves as the adversary to the throngs of Cascadian BM bands who couldn’t care less about presentation and ideals. Such happenings are blasphemy to Erik Danielsson and crew, and The Wild Hunt is their extermination plan. May everyone else get impetigo but them.