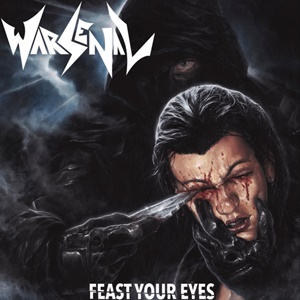 Metal can mean many things to many different people. It’s a type of genre that expresses so many emotions of an aggressive, somber, or unbridled nature and channels those feelings in a healthy direction. Appealing to the speed/thrash hordes, Quebec’s Warsenal assault the senses in that youthful, relentless manner for their second full-length Feast Your Eyes. Previously on the radar screen for their debut Barn Burner released in 2015 on Punishment 18 Records, they’ve moved on to Svart and gained a new rhythm section in the four-year interim. After copious playbacks, it’s clear that the trio live for the early days of the movement when in the 1980’s the style wasn’t trying to gain commercial acceptance – it was about smashing barriers of punk and NWOBHM into energetic self-expression in a cohesive yet furious songwriting format.

Old school, heads down speed/thrash is the name of the game for Warsenal – whirling word spew, brief musical reprieves that still slam in a militant marching manner, and a go for the throat attitude pour out of these nine tracks. In between the upbeat tempos and fleet of finger lead breaks, you’ll also get some nifty groove syncopations between guitarist / vocalist Mathieu Rondeau and bassist Jeffrey Millaire during instrumental sections of “I am the Blade”, and a killer opening drum solo from Vincent Caron on the follow-up “Lords of Rifftown”. These gentlemen have studied at the feet of Kill ‘Em All, Killing Is My Business, Pleasure to Kill, and a bit of their own domestic output from Exciter if you need some reference points – as a lot of killer riff combinations and Metallica/Iron Maiden-ish harmony sequences electrify the subsequent faster verses and off the rails-like charm that songs like “Insatiable Hunger” and “Burning Ships” deliver. It’s key to develop those groove/hook elements to aid distinction song to song – and it allows the musicians to showcase a bit of their progressive interplay and chops in the process, which Warsenal excel at.

Feast Your Eyes could conjure up imagery and visions of 1983-1986 all over again – before the movement became commercialized, watered down, and label influence/ economics became to some more important than musical integrity. They’ve been able to command the stages at festivals/tours of Japan, Mexico, the United States beyond their mainland Canada – so it’s evident that they are a strong representation of the current speed/thrash brigade.