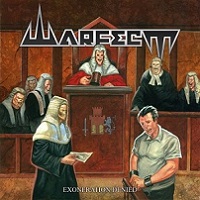 Utterly hilarious cover art aside (possibly the worst in recent memory), Sweden’s Warfect are a cut from the old German thrash chopping block, showcasing a rather obvious Sodom influence on their sophomore Exoneration Denied. The band is comprised of current members of mid-tier black metal bands such as Bestial Mockery and Lord Belial, making this one of those zero-thought, total fun bands that manages not to embarrass themselves. Well, everything but for the cover.

The Sodom comparisons are found in vocalist Fredrick Wester, who has apparently the same amount of acid in his lungs as Tom Angelripper. To most ears, this is the proper vocal approach for brutal thrash, for it takes out the bouncy, crossover aspect and replaces it with some real froth. And Wester gets frothy, for sure, most notably on “Filled with Hate,” where he reels off some rapid-fire vocals in the verse while some hellacious guitar chugs create a pendulous groove. There’s some death metal overhang on “Retribution Unfold,” while the constant polka pounding on “Slit with Razor” and closer “Pried from Earth” are rife with ideas from Germany’s bygone thrash glory era.

Retro thrash of any style usually gets a resounding frowny face, but Exoneration Denied defied all expectations. Warfect couldn’t present a new idea if their lives depended upon it, but hey, vintage German thrash needs some lovin’ too. 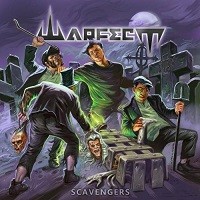