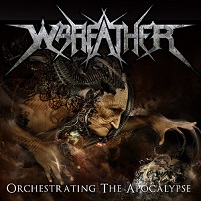 Steve Tucker is a name that should speak volumes in death metal.  Since his three-album stint in Morbid Angel (has it really been 10 years since Heretic was released, wow!), he joined the excellent Nader Sadek, but Warfather stands as the first-time he’s been able to really stand and make a name for himself once again.

The most surprising factor about Orchestrating the Apocalypse is how much atmosphere has been soaked in without watering down the death metal.  Due to Tucker’s involvement, there will obviously be comparisons drawn to Morbid Angel in the musical department, but songs like “My Queen Will Not Be Mourned,” “The Shifting Poles,”  and “Waltz of the Solstice” are truly enhanced by an atmosphere, that when combined with Tucker’s upfront and ominous growls, feel almost ritualistic in nature.  Unlike most bands that misuse them, there are a few interludes here, such as “Summoning the Warfather,”  that also do a great job of building atmosphere and keeping momentum between songs.

Not to say that Orchestrating the Apocalypse isn’t a crushing death metal machine.  Frequent blasting through tracks like “Legions” will certainly have their appeal to fans of Morbid Angel and Behemoth.  Album closer “We Are the Wolves” ends things on a particular high note with unrelenting fury, making hard not to hit the back button to hear it again.  Tucker also handles guitar duties (a switch from his usual bass), and there are a number of strikingly melodic solos and leads, like on “Ashes and Runes,” that will entice more than the standard death metal fare would.

If there is one thing (slightly) holding back Orchestrating the Apocalypse, it’s the production.  While an album like this doesn’t need a squeaky clean production, some of the leads would benefit from a more prominent presence and a little more meat on the guitars could make this sound absolutely crushing.

Warfather’s debut stands as a promising startup and shows Steve Tucker still firing on all cylinders, worthy of his status in the death metal realm.  More atmospheric than one would expect, while still heavy enough to scorch the earth, Orchestrating the Apocalypse should capture the attention of metal heads and serve as a great way to start off 2014. 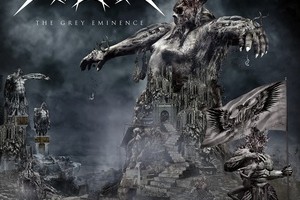