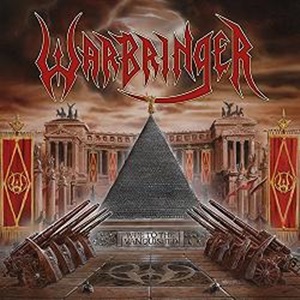 Thrash in its fourth decade has never been stronger – debate may waver on a physical sales perspective, but for the legions who love seeing their favorite bands in clubs, theaters, or large festival gatherings, chances are you have plenty to go around. After watching lineups splinter and falter in support of 2012’s IV: Empires Collapse, vocalist John Kevill did some serious soul searching to keep Warbringer alive and off life support. Armed with the right players and a fresh label deal in tow, Woe to the Vanquished as the fifth studio album aims to remind listeners that the best metal albums (not just thrash) contain eargasmic hooks, ripping riffs, vocals that make you want to join in the fray, and songwriting that crushes from first listen to the latest airing.

Eschewing any setups, “Silhouettes” roars out of the gate as guitarists Adam Carroll and Chase Becker slice and dice through circular twin harmonies and hefty rhythms, while John roars and screams as fiery as ever in the band’s decade plus existence. Bassist Jessie Sanchez isn’t background fodder either – often adding the progressive edge to these set of tracks, racing up and down his instrument with precision and tastefulness. Because of drummer Carlos Cruz, Warbringer never shy away from ramping up tempos to death/extreme proportions, as evidenced by the numerous blast passages in the title cut – but what people also take in are the melodic, traditional, and progressive transitions within the same arrangement, separating Warbringer from most major newcomers with little stake in thrash. Sure, Bay Area inflections appear from time to time (Zetro-era Exodus in the initial riff/chorus combination for “Remain Violent” easily apparent), but when the band chooses to lay down the proverbial ‘slam’ part, it’s vicious to the point of nuclear annihilation on “Shellfire”.

John takes his academic interest in history and combines natural military combat and real-life violent situations to serve up proper, intelligent lyrics that never pander to the audience. Digging deeper into their love of Mercyful Fate, Sacrifice, and Artillery for some of the clean, exotic guitar lines against the heaviness for “Spectral Asylum”, the closer “When the Guns Fell Silent” follows the epic blueprint Iron Maiden developed in the 80’s – incorporating narrative themes, varied instrumental changes where musicianship reigns, and a darker feel that is melodic all the same. The cover art from renowned artist Andreas Marschall (Blind Guardian, Hammerfall) matches the contents – poster board material that is needed and necessary for metalheads globally.

Warbringer in 2017 has arisen out of the haze and stand triumphant to knock many old veterans off their comfortable pedestals. Woe to the Vanquished proves thrash isn’t a one-trick pony, and can serve up memorable, dynamic material that has staying power.