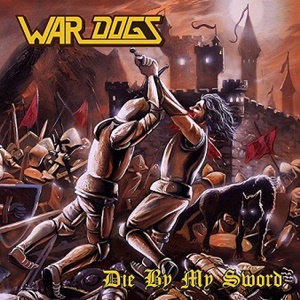 Old school heavy metal never fades away. Especially with legends like Iron Maiden, Judas Priest, Saxon, Accept and Raven to name a few still hitting stages globally and releasing new material, inspiring multiple generations to plug in and play. War Dogs from Spain sit in that reverence of the old, trusted guard, arising in 2015 and releasing a self-titled EP in 2018 before signing with Fighter Records for this full-length Die by My Sword. And for those that love twin guitar melodies, equally engaging bass activities, punchy drums that rock and solid mid-range to slightly higher vocal action, these ten tracks probably will check all your pleasure-seeking desires musically.

Eschewing any atmospheric intro, the band dives right into the title track – the guitars rolling out on an endless highway, the crunchy transitions perfect for Alberto Rodriguez to hit similarities in range and feel to Visigoth’s Jake Rogers, also giving drummer José V. Aldeguer a mini fill solo spotlight in the extended instrumental section as the circular twin harmonies bring out the air guitarist in us all. Shifting around in various mid-tempo to semi-speed textures gives the record dynamics and earmarks to look for again and again – guitar advocates sure to love the charging “Wings of Fire”, while low-end bass mavens will hail “Ready to Strike”. Reference points from Omen to Iron Maiden, Angel Witch to Riot pop up – and a special guest appearance from Bryan ‘Hellroadie’ Patrick of Manilla Road on “The Shark” is killer, a tribute song to the much missed Mark Shelton, including numerous lyrical reference to the band’s catalog of greatness. The animated style cover also will give metal followers plenty to digest for its intricacies, especially in a vinyl format.

Expect heads to bang, bodies to adorn denim, leather, and the favored patches, and devil horns to spontaneously be summoned upon every track that War Dogs delivers. Die by My Sword won’t be the last we hear of these gentlemen, rest assured.