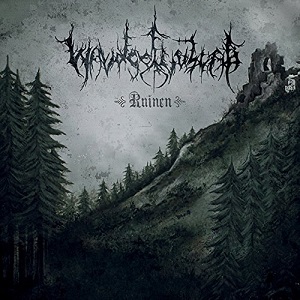 Waldgefluster have been laying down emotional, atmospheric black metal for over a decade now. A one-time solo project of main man Winterherz, Waldgefluster has expanded to a full line up as of 2014, and I think that shows on their latest offering, Ruinen. The song writing and over all cohesiveness of the material on Ruinen has matured from the last album, Meine Fesseln, which is no small feat, but let me expand on that thought…

Ruinen opens with an ambient shimmering guitar effect which leads you directly into the first full track, “Weltenwanderer”. Winterherz and his aptly capable crew guide you thru morose, beautiful black metal that is bolstered with beautiful lead accents and an array of melancholy riffs that uplift as much as they may cause one to wistfully reflect. Winterherz’s excellent vocal styling really expands the music with a range that starts with your normal blacked rasp but extends to moody choral clean singing voice and backing chants that give Ruinen another layer that makes it worth coming back to for multiple listens.

“Trummerfestung” continues on in its kaleidoscope of moodiness and has an excellently placed guitar solo mid song that sings beautifully, high lighting that the ‘new’ band members are more than just hired musicians. Waldgefluster changes the pacing up a bit with the magnificent “Ruinenfelder” which begins with clean guitars and mournful violin and weaves its way in and out and lets loose with an emotional down pour mid-way thru which washes over you in its sincerity and diligence of melancholy.

Ruinen is a lengthy album, clocking in at just over an hour, with the average track being 9 minutes plus, so it is quite epic in scope, but Waldgefluster manage to handle the material capably and keep you interested thru the entirety of the album, which is no small feat. There are all sorts of bands coming out of the wood work that play this style of music, but few hold a candle to what Waldgefluster are capable of, and Ruinen is a prime example of that.