For the length of black metal’s existence, nature has been a nigh-constant thematic pillar, no matter its subgenre inclinations. Whether brutal and primal places in the vast dark northern forests far from the warmth of God’s

For the uninitiated that means the stylings offered by the band are a kinetic, hyper-melodic take on black metal and married with lush, often indulgent forays in the post– pool of sound. Indeed, the songs across Mondscheinsonaten (Moonlight Sonatas) are lengthy, organic affairs that digress to allow the music to breathe, swim, and soar with equal aplomb. To say the band is a German response to Panopticon would be a disservice to both bands. They do, however, chase similar ends via similar means (and given their 2016 split together) they’re likely very aware of their spiritual kinship.

All of the above elements we find in “Und dir Wind…”, blistering, ferociously melodic verses give way to explosive peaks and expansive bouts of flight beyond those peaks, indeed the living embodiment of the wind. The many transitions are gradual, an ebb and flow like the tides clearly honed by years of refinement (and prior albums), it’s the sound of a band very comfortable and in control of its repertoire and vision.

Acoustics (or folk leanings, depending on your point of view) come and go, featuring as components of some works (“Von Winterwäldern und Mondscheinsonaten”) or the center of the show in their right (album bookends “Einleitung” and “Staub in der Lunge”). They’re one thread among many in a dense, well-worn tapestry of expression. Despite the immediacy rendered often by the band’s heavy melodic focus, Mondscheinsonaten is a dense listen. As part the course for this genre mix, the songs often go long, 6 to 10 to 12 minds and beyond. There isn’t anything new here, so to speak, the listener will find genre highlights (Dawn to Agalloch to Alcest), but in truth innovation for innovation’s sake does not usually make for an invigorating listen.

To this end Mondscheinsonaten delivers and then some. The sonic embodiment of the Northern Hemisphere spring now in full swing around us, it’s the sound of life bursting from all possible seams. It’s a carefully crafted and a continual pleasure to indulge. 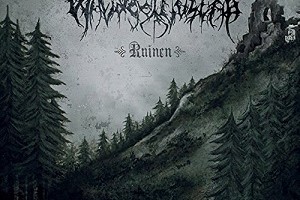