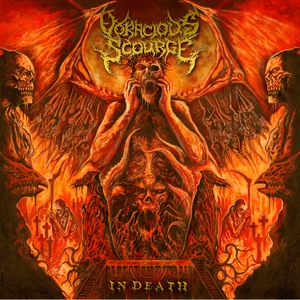 Voracious Scourge is a name that just sounds brutal. Having witnessed their 2018 EP, Our Demise, It’s a fitting description. In Death is their full-length debut, and showcases exactly what a meeting of the brutal death metal minds can bring together in an effort to bring the listener back to a time where being a death metal band meant you could write effective songs without overdoing the tech aspect.

For those new to the band, they feature Sinister vocalist/drummer Aad Kloosterwaard, Suture’s Jason McIntyre on guitar, and ex-Suffocation drummer Mike Smith, as well as bassist Tony Choy (ex-Athiest/ex-Cynic) and Billy Richard on rhythm guitar. Thus, there’s a lot of talent to pull from and death metal history to take into account. Voracious Scourge is a welcome return to the ‘90s-eque form of brutality, where melodies and technical bits could be included without it becoming a soulless monster hellbent on just doling out flashy, intricate parts. There’s a real feeling of heaviness and grit to each one of these tracks, and they can absolutely demolish with savage riffing at one point (see the visceral “Heaven’s Scorched”) but they can also bring in some eerie melodies without losing that brutal traction and forward momentum (as in the title track). The album gives them a greater chance to focus on that atmospheric side that they hinted at in the EP and it does pack a diverse wallop. The riffing can be rich and show some technical prowess (a la Suffocation or Deeds of Flesh) but the frequent shifts in tempo and melodic touches give them a nice degree of separation from those acts – all while maintaining that same sledgehammer approach to the material.

Voracious Scourge keeps the ‘90s death metal aesthetic alive without feeling like they are simply a throwback act. Perhaps due to the talent involved, but the reverence to the old guard is duly noted while giving the material a different twist to it. In Death can steamroller listeners with the best of them, but the attention to melody and songwriting will bring you back for plenty of exciting listens. 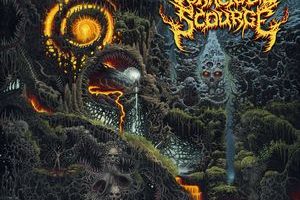