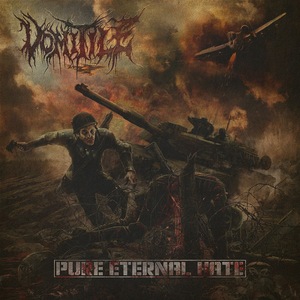 When it comes to death metal, it’s not often that a band really can do much to surprise. The most brutal and technical areas just continue to expand, but Vomitile proves that it’s still a possibility in terms of whose influence is being drawn from. In the case of Vomitile, the first seconds of “Mass Extermination” is going to be reminiscent of Malevolent Creation, and not one of the more usual sources.

That ‘90s death metal style does stick with Vomitile for the rest of Pure Eternal Hate, and it doesn’t ape Malevolent Creation, but it pleasantly sticks with ‘less copied’ acts as influences. Another easily cited source would be that of Kataklysm, with an emphasis on some thick and chunky grooves to aid with song dynamics. The formula is some pretty straight-forward stuff – pure death metal is all that one is going to be reaching for. That’s not a bad thing however, as Vomitile are quite learned in the subject, and the linear attack serves them well. The focus on songwriting over unbridled brutality is welcomed, with the mid-tempo range flowing for the act, and the afore-mentioned grooves giving each track something for the listener to lean into. For an album like this, it’s actually quite catchy (see “Labeled Dead”). The type of album you can come back to due to its startlingly melodic nature, even if it doesn’t feel like the most innovative release in the world.

Almost the death metal equivalent of comfort food, you know what you are going to be getting with Vomitile’s Pure Eternal Hate. It’s reliable and enjoyable from beginning to end, focusing on a visceral yet melodic approach that crushes everything in its path.