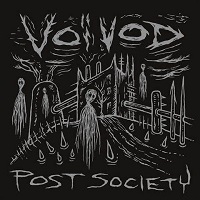 Identifiable guitarists in metal, unfortunately, are few and far between. Advancements in technology, not to mention the ever-shrinking riff pool have subsequently diminished the value of singular inventive players. One such guitarist was Voivod’s Denis D’Amour, better simply known as “Piggy.” Piggy passed away in 2005, leaving behind a remarkable trail of brain-bending, alien, and demented riffs. It was a void that appeared to be unable to be filled until the band tapped Martyr guitarist Dan Mongrain for the role in 2008. Voivod couldn’t have found a better replacement.

Mongrain’s work is on full display here on the five-song Post Society EP, a primer for the band’s next full-length. (He was also on the band’s most excellent 2013 Target Earth effort.) The EP is a whirling, quirky return to the band’s glorious Nothingface days, an album that cast the band out of the thrash scene and into netherworlds not quite explored in metal. On Post Society, Mongrain’s riff amalgamations drive home “Post Society” (which also includes a rumbling opening bass line from new member Dominique “Rocky” Laroche) and in particular “Forever Mountain,” which collects a hodgepodge of Piggy-esque riffs and throws them into a French-Canadian blender. The spacy “Fall” is balanced by “We Are Connected,” one of the band’s trademark progressive punk jams, while a cover of Hawkwind’s “Silver Machine” takes several sideways glances at The Outer Limits album, showing how varied the band’s influences really are.

There’s no one quite like Voivod in metal and for good reason – few bands are this individualistic and uncanny. The Post Society EP drives home such points, but then again, there are many of those who have long been “in the know” about Voivod. If you’re not, then shame on you.