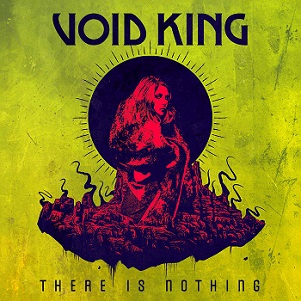 Both Glenn Danzig and Vince Neil do the same thing live with their microphones: instead of finishing whatever vocal line they’re on, they purposely pull the mic away from the mouths so they don’t have to give off the impression they’re out of breath. Now, we’re not the first to point this out, but it’s one of those inescapable thoughts whenever Danzig and/or Vince Neil is brought up, which relates to the band in question, Indianapolis stoner doom stompers Void King.

Formed in 2014 and with a 2015 EP already under the belt in the form of Zep Tepi, There is Nothing is the band’s first full-length. Honing directly on the volume, riff-heavy sound that is part-and-parcel with stoner doom, the band’s main identifier is vocalist Jason Kindred, which is where the Danzig comparison lies. Kindred, unlike Mr. Danzig, has a tremendous amount of heft in his voice. He’s more rock and less punk, if you will, a trait that works like a charm on “Canyon Hammer,” with the man bellowing “Canyon Hammer COMING DOWN!” Seriously, heavy as you-know-what. Even on the band’s more sludge-like tunes, Kindred cuts through, most notably on “Box of Knives” and the barreling “Release the Hawks.”

While it’s not clear what type of band Void King would be if they had a standard fare quasi-understandable grunter (a normal angle for bands a similar thread), the fact Kindred is so imposing and enticing is more than enough to get folks in the door. There is Nothing causes the expected doom rumble-and-roar, but Kindred should keep his resume tidy – bigger bands may come calling…and soon.