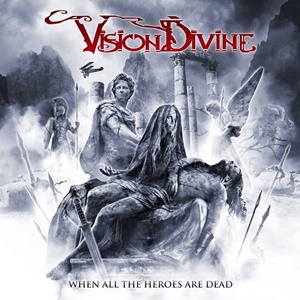 Splitting his time between Labyrinth and Vision Divine, guitarist Olaf Thörsen finally returns to his solo project turned fully active act for the first album in seven years for When All the Heroes Are Dead. Featuring new members with drummer Mike Terrana and vocalist Ivan Giannini, Vision Divine’s eighth studio album contains a dynamic blend of power/progressive metal, rich with strong musical hooks, wicked keyboard/guitar-oriented syncopation, and lively, full melodies. Certain musicians know how to play to their strengths, reaching deep within their experience and instincts to create memorable songs- and this is what you’ll get throughout this eleven-song (plus a 12th digipack bonus cut) outing.

“The 26th Machine” takes a bit of inspiration from earlier songs like “The Perfect Machine” as well as “The 25th Hour”, while the Helloween/ “Future World”-esque guitar harmonies during “Now That All the Heroes Are Dead” reverberate thoroughly against some propulsive Terrana kitwork. And for those that miss the dance/cyber aspects of Vision Divine veering into Labyrinth mold, look no further than “300” or the uplifting speed charge for “The King of the Sky”. Olaf and fellow guitarist Federico Puleri attack their axes with fervor, knowing how to place the right neoclassical and intricate accents without overstepping boundaries of the arrangement at hand – parts cascading in and out with proper higher melodies or stronger triplet runs to make “3 Men Walk on the Moon” another standout. Vision Divine has always had a strong vocal component given the work of Fabio Lione and Michele Luppi on previous albums – so Ivan may have big shoes to fill but he knocks it out of the park consistently. A rich register, rising to the occasion when the task calls for it, but also tender and thoughtful at lower measures during a moving theatrical-like ballad such as “While the Sun Is Turning Black”. People may remember the single “Angel of Revenge” that gave insight into the new lineup a few months back – well if you choose to buy the digipack version of the record, that’s the bonus song and it’s a versatile power number featuring plenty of progressive twists to showcase all the abilities of this sextet.

Being a fan of Vision Divine for decades, When All the Heroes Are Dead could quite possibly be the best record in the band’s discography because of their knowledge, their veteran presence, and their ability to execute Euro-styled power/progressive metal on the highest level.