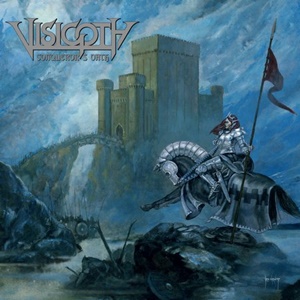 Seasoning on the road reigns in some of the longer passages for these eight songs – but do not think that they’ve lost any semblance of hook/harmony ratios on both musical and vocal fronts. The warrior/marching guitar run that signals “Steel and Silver” matches up to the majestic, mid-tempo arrangement, the choir/mead hall chorus tailor ready for unison backing action from audiences when aired across live stages. Twin Maiden-esque guitar charges and an equally addictive Steve Harris-oriented bass line makes “Outlive Them All” a front half barnburner – Jake Rogers racing with words and bellowing out key parts like ‘There can be only one!’ with passion and pride. The tales of fantasy, mythology, and history serve as alluring storylines against the epic, soaring musical landscape – inspiration coming from a bevy of European and American bands (think Omen, Manilla Road, Grand Magus, Manowar, and Twisted Tower Dire if you need comparisons). “Salt City” showcases a bit more of their 70’s classic hard rock side, the main riff very similar to the explosiveness that put “Detroit Rock City” from Kiss on the map – while the epic side of the band where they flesh out instrumental passages and shift moods/tempos comes to the forefront on “Traitor’s Gate” and the doomier, closing title track.