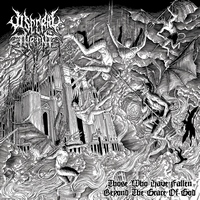 A bit of a lengthy title on this one, particularly when the album (EP?) only consists of 4 songs and a brief introduction. But there’s no denying the “metalness” and coolness of this particular title. Unfortunately, this is an album that will sadly lead to some disappointment.

First things first, this isn’t by any means a bad album. You can tell by the Comatose label that it’s going to be on the more brutal end of the spectrum, and Visceral Throne delivers what you’d expect. There’s slam element for sure, with Dying Fetus and Internal Bleeding undeniably getting the lion’s share of the credit here. Hell, the band even tosses in an Internal Suffering cover (“Colossal Vortex”) if you didn’t think they had enough street cred. There’s a few interesting progressions and riffs, particularly in “Indulgences,” that will be noted as worth checking out. There’s some heavy groove and quite stomp-able slams to be had, truth be told. Unfortunately, the production absolutely butchers this album near unlistenable. The snare drum sounds very “tin can-ish” and it’s quite upfront. When you hear “The True Sin,” it’s almost as if you can only hear the snare and vocals once the blasting begins. During these moments, it also seems like the drumming itself is a bit loose, further complicating the issue. It becomes intensely frustrating as the album moves forward, even at its rather short length.

Given a more effective production job, Those Who Have Fallen Beyond the Grace of God could easily be a strong effort in brutal, slamming death metal. But as is, you are probably going to want to wait until the next time around. Unless of course, you enjoy tin can snare drums.