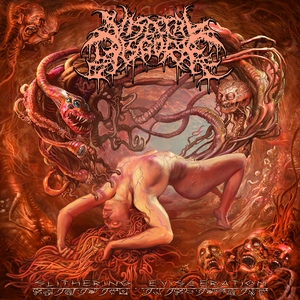 Some may remember Visceral Disgorge due to their 2011 debut, Ingesting Putridity, which stood to many as a high-quality piece of brutal death metal. But an eight year absence (some of this due to the death of guitarist Steve Rosenzweig) is bound to cause many to forget about an act, particularly after just one release. Nonetheless, Visceral Disgorge is back with a vengeance for their sophomore effort, Slithering Evisceration, which is bound to make extreme metal fans turn their heads.

With the gruesome cover art, some will mistake the band for a more generic ‘slam’ death metal act, which has certain implications. But if you give the album a listen, you will find some slams to be had, but they are far from the band’s main focus. Thoroughly trained in the Suffocation and friends school of brutality, there’s some intricate riffing going on, especially when the band decides to accelerate into high gear. It’s nothing completely innovative for the sound, but it’s well done and definitely takes a hold of the listener and demands attention. When they go for the groovier riffs and dips into slam material, the brutality is all-powerful. Massively chunky riffs will get you moving, and are sure to be a destructive force in the live setting. But more than that, the band isn’t above having a little bit of fun with the whole process either (something matched on their debut), as evidenced by their lyrical approach and dropping of some entertaining samples. It’s a refreshing change of pace for the style. As are the short, 3-ish minute tracks that trim the fat and deliver nothing but raw energy.

Proving they’ve lost none of their brutal prowess, Visceral Disgorge return with an album that does plenty of pulverizing. It may not catch the metal world by storm per say, but for those in the know, it will be seen as another batch of punishing tracks from a band that knows how to strike with deadly precision.