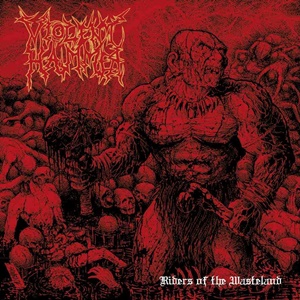 Amidst all the pristine and clean sounding metal records of today, sometimes we need that raw, unbridled attack that transports sound and time. Such is the case here in Violent Hammer – a Finnish death metal act that issue their first full-length for Riders of the Wasteland, even though they’ve been together since 2006, releasing three demos along the way. The chaotic band logo and zombie/skull-filled cover art emboldened in red gives you a clue that we are dealing with some old school death, crust, d-beat fueled outings, when speed, intensity, and relentless movements on the musical and vocal front obliterate any semblance of commercial aspirations.

Between the roars from a cave Joonas Niemeläinen employs and the primitive Discharge/Napalm Death meets Repulsion and Autopsy textures on the musical side, this is a nine-song cavalcade that rarely lets up – even when setting the table for the intro riff to “Screams of Agony” for instance, it’s only mere seconds before the tremolo runs and incessant snare/cymbal combinations blur together for unmitigated insanity. When the guitars and rhythm section settle into a slightly mid-tempo/groove register for spots of the title track, you can imagine the swirling stage diving or body carnage strewn about in the audience – but for the most part Violent Hammer are about quick hitting two to three-minute and change arrangements, the solos frantic to include every divebomb/whammy bar trick in the book. At nine songs in under 26-minutes, there’s no time to waste – but the problem is the tracks all fall into this sameness as far as riffing, screams, d-beat/grindcore drum patterns, without any distinguishing qualities beyond their sheer ferocity and intended primal execution. Maybe next time Violent Hammer can slip into another gear a bit more often to break up the all-out war aspect to their sound.

Those who miss 1987-89 underground music when the lines were blurred between death, crust, grindcore and a bit of thrash will dig Riders of the Wasteland most. 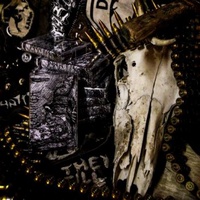