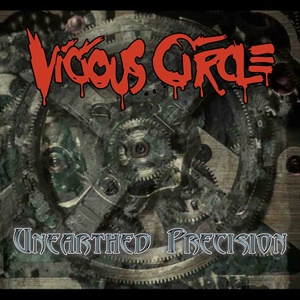 An integral part of the New Jersey death/thrash scene since 1988, Vicious Circle are a familiar name to those of us who went through the fanzine/tape trading circuit of that time. Releasing a series of demos that eventually got them on JL America for their debut full-length Cryptic Void in 1993, they would slug things out in the underground on different labels and DIY EP/demo ventures – finally back on the recording front for this four-song EP Unearthed Precision. Containing the main lineup of those 90’s years with singer Brian Cook, guitarist Vinny DiBianca, bassist Mel Leach, and studio drummer Dave Surran (Ryan Hill is available for the live shows) – it’s as if the band has not lost any step in being intricate and technical at times while still remaining brutal in it’s thrash/death montage stance.

The insane speed trills and up/down picking intensifies the explosive, progressive-laden approach to these four songs. It’s a wonder that Vinny doesn’t run into hand cramping issues, especially when you hear the insane twists and fluid lead break for closer “Since Oblivion” – the midway arrangement tempo change taking the song from technical thrash to more of a “Pull the Plug” meets late 90’s Death-oriented atmosphere while the closing features jackhammer riffing/scream combinations a la Sepultura or prime-time Pantera. Brian as a singer carries himself as a jackal of all hardcore/thrash/death trades – spitfire and forceful, able to register growls and screams with conviction at a moment’s notice. It’s a wonder he doesn’t trip over himself at the bullet train word spew present for “Killing Culture”. The band have incorporated influences from newer acts as much as the old guard – insuring their material doesn’t sound dated in any way, while not forsaking any of the brutality and intricacy necessary to be relevant to newer generations of thrash/death followers. It’s as if acts like Allegaeon and Into Eternity factored into an already swirling cauldron of Death, Bay Area thrash, and a pinch of East Coast tradition a la Ripping Corpse or Demolition Hammer to make sure that Vicious Circle keep the pedal to the metal.

The only bummer about Unearthed Precision is the fact that at four songs in 18 minutes, you feel like this is over before it really begins. All the more reason to pick this up and hope for the next full-length soon, as these veterans illustrate that strong skill sets in multiple genres when brought together creatively can make for an incredible, hard-hitting final product.