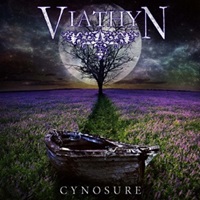 Progressive power metal: a double edged sub-genre of brilliant instrumentation at times, and clichéd mead hall vocal choruses or equally obvious musical hooks on the other. And then there’s how much you take yourself seriously in a style well known for ‘cheesy’ tales of warriors, emerald swords, and chasing rainbows. Starting in 2006 as a three-piece, Calgary Canada’s Viathyn worked its way up the ranks through an instrumental EP release Demagogue two years later, expanding to a quartet to release their debut album The Peregrine Way in 2010. Vocalist/guitarist Tomislav Crnkovic would open a studio with a friend called Perfect Fifth Studios, and the band would spend a few more years working on the follow up album, a 9 song, 64-minute record entitled Cynosure.

An exploration of disillusion, discord, affliction, enlightenment, and grandeur as seen through nine different storytellers, Viathyn live for a more European-oriented montage of neo-classical runs, twin guitar harmonies, double bass fury, and the occasional mid-tempo transition that can be highly folk or Celtic influenced. The two bands that come up the most when taking in the layered guitars, positive/uplifting vocals, and generally long arrangements (most of the cuts clock in at over 7 minutes) are Wuthering Heights and Falconer. Not everything is full on electric bombast; check out the lighter, semi-tribal moments with clean guitars on the first half of “Time Will Take Us All,” giving Tomislav a chance to use his hypnotic low range for added epic effect before the peppy distortion charge levels your aural compass.

Those who really study the deep works of classical composers will recognize some familiar strains during the 3:26-3:50 instrumental sections of “The Coachman”, a la Savatage during “Prelude to Madness” on their Hall of the Mountain King heydays, the chorus work showing love for Orden Ogan or the aforementioned Falconer. Tomislav and lead guitarist Jacob Wright align to keep the power melodies and cultural textures abundant song to song, some of their best work taking place on the heavy to reflective “Edward Mordrake” and frenetic 9:35 title track, something that Wuthering Heights and Blind Guardian fans would be proud to simulate air maneuvers for.

On future recordings I hope Viathyn seek the occasional foray into shorter arrangements, as I think it would add a bit of dynamic contrast to these obvious steady power/progressive metal output. Cynosure is proof again that our neighbors to the north can rival the best European acts going in this faithful, happy sub-genre.