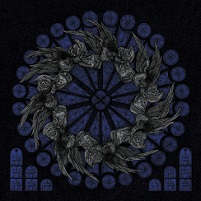 With French black metal, the expectation is basically this: Be obtuse, partially confuse the listener, and circle back every now and then to the core. In a sense, it’s created a sort of mini-competition among the scene’s bands, which can only be a good thing, obviously. This is no secret, but the trail is still behind the masters, Deathspell Omega. Yet the additional, worthy bands who comprise of the scene (Aosoth, Antaeus, and Blut Aus Nord) continue to show up in new permutations, like VI, who feature members of the aforementioned Aosoth and Anteaus.

De Praestigiis Angelorum is the band’s debut, a fertile, brash offering that takes off on the extreme elements found in French BM. The rangy, mangled chord movements so important to French BM are what VI rely upon the most, as heard on excellent album opener “Par le jugement causé par ses poisons,” which finds the trio of INVRI, BST, and Blastum waging an aural war with a surge of blasting and expansive guitar work. In fact, the guitar work only gets more interesting from there, most notably on “La terre ne cessera de se consumer,” a song that features a handful of whirling, tornado-like guitar pieces. It’s a veritable tsunami of blackness.

The unbridled, go-for-broke pulse of tracks such as “Regarde tes cadavres car il ne te permettra pas qu’on les enterre” and in particular, “Voilà l’homme qui ne te prenait pas comme Seigneur,” demonstrate all that is right and heightened regarding the black metal arts, French-style. The songs are dis-harmonious, chaotic, and purposely messy, thus driving home the idea of how much bands like VI can bombard the listener. An album like this could only succeed. There’s simply too much talent and tenacity for De Praestigiis Angelorum to fail.