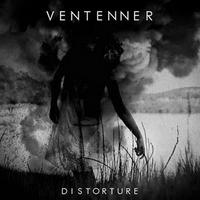 If you’ve ever wondered what Nine Inch Nails might’ve sounded like had it never released The Fragile and Trent Reznor died somewhere in 1997, Distorture might almost be the result. 1998 is everywhere here, clicky-electronics give rise to distorted surges of guitar, whisper/yell vocal dynamics, the reaches of all things atmospheric hanging in the back of every song. At almost an hour in length it’s more than a little exhausting considering Ventenner doesn’t quite possess the attributes that made 90s-era NIN work so well the way it did, but it’s not all bad. There are pockets of nostalgia-laden awesome littered among nigh-equal amounts of filler so, for anyone curious, continue with caution.

Beyond the mood-setting but otherwise unnecessary introductory track, everything one needs to know about this album and its source material come out in opener “Six Blood” and its follow-up “Wave”. Electronics augment the songs, sometimes laying a foundation upon which walls of guitar, background atmospheric walls of sound, and the many forms of vocal delivery are sat. It’s not remotely original, now or 1998, but on a whole, it works, sometimes well. In “Skin Ritual” the listener finds the street light/late night kind of industrial ballad that would often find itself as a backdrop to left-of center vampire films and “Fallout” is nice little pocket of noisy melodicsm, honestly working out far better than it probably should.

I’m much too unfamiliar with the scene from which this album hails to know if this kind of legacy-worship is a common thing but I imagine much like any other scene, revivals of this or that era are reaching for the next wave of nostalgia in perpetuity. That being said, if Distorture were cut down to around 40 minutes it could really serve as a kind of loving tribute to the mid-late 90s pop-industrial scene. For any and all familiar with that era you’re already very familiar with what you’ll find on Distorture before you even press play. Possessing neither the dysfunctional genius of Reznor or the cleaner pop-leanings of Stabbing Westward (…and certainly not of Orgy, not a bad point of reference here), Ventenner nonetheless does score some win here and there on this release and for anyone with an itch for industrial, you could certainly do worse.