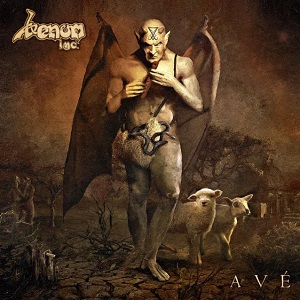 What differentiates Venom from say, Ratt or L.A. Guns is that its subsequent splinter group, Venom Inc., never tried to go out just as “Venom.” You see, the “Inc.” does the trick, turning one of the forerunning black metal bands into an even greater sideshow than they already were. To further muddle matters, Venom Inc. was previously known as M-Pire of Evil, an outfit that released a handful of underwhelming efforts. No one should expect anything different from Venom Inc. With Tony “Demolition Man” Dolan on bass/vocals, Jeff “Mantas” Dunn on guitar and Tony “Abaddon” Bray on drums, their debut foray Avé can’t be saved by its association with Venom.

The juvenile aspect of Venom has carried over to Venom Inc. You’re not going to be intellectually fulfilled listening to cuts like “I Kneel to No God” or “Black N Roll,” the latter rolling out every imaginable cliché possible, even name-dropping Metallica, who were already blowing Venom off the stage in 1984. Sure, the searing “Blood Stained” and crunchy “Preacher Man” get the job done in terms of being no-thought-required old man metal (Abaddon’s drums do sound like a drum machine, though), but unfortunately, Venom Inc. occasionally borders on parody level, no matter the background of the men involved.

Forever one of the most overrated metal bands in history (don’t forget this: Venom would eventually admit their Satanic lyrics and presentation meant nothing and were for “entertainment” purposes), Venom has long outlived its usefulness in both the current Cronos-fronted version and in Venom Inc. Avé is a clunker. No surprise, really.