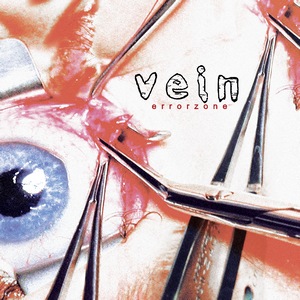 The reaches of metallic hardcore have been pushing in harder and heavier directions in recent years. Bands like Code Orange and Harms Way have been championing the cause as of late, something that one can imagine that Vein will be also leading once word gets ‘round about errorzone. It’s a punchy and abrasive album that still maintains a sense for melody without compromise.

Intriguingly, Vein manages to take scorching hardcore and fuse it with the darker/artsy side of nu-metal (think Deftones) and mathcore and makes it work. It’s noisy, it’s chaotic, and it will take a few listens to get through some of the initial abrasion that the disc leaves. But at the same time, that level is also one that the band intends to hit hard and heavy. Tracks like “Demise Automation” and “Broken Glass Complexion” are meant to pump up the listener and send them into a fury as some intense chugs hit the ground. But some songs hit a deeper point with their combination of cutthroat aggression and more atmospheric notes – tracks like “Rebirth Protocol” and the title track can reach scathing heights but the nu-metal tendencies give them some emotive weigh without going too far off the gas pedal. The album’s strongest cut, “Doomtech,” hits both above points, with some groovy riffs countering more explosive heaviness, and incorporating some strong clean vocals in for extra texture. It’s a unique feel for this type of material, and one that should have little difficulty gaining traction with those seeking a massive heaviness or something more outside the box.

Vein are bound to make a name for themselves based on the impact of errorzone. Thoroughly destructive, yet somehow catchy when it needs to be. The opposing forces are lined up with each other successfully and enhance the other instead of diluting it. An impressive debut.