Simple death metal is usually the best kind of death metal. It doesn’t work in modern metal when things are simple because it sounds dumb, and it doesn’t work in power metal because it sounds contrived, but in death metal, simplicity has always been the way to go. So obviously, Vastum’s debut, Carnal Law is a straight-to-the-gut punch of an album, with six songs of meaty, chunky rhythms and brutality on full display. Oh, and it’s simple. Was that uttered yet?

With a production job right out of the Scott Burns school of graininess, Carnal Law gets kicked off with “Primal Seduction,” a song that grinds with the ferocity of early-day Suffocation. “Re-Member” has a simple chug-a-lug to it that is downright enjoyable to the point you can dance to it. Or not. Similar groove avenues are explored on “Devoid” and the title track, two songs that lean heavily on the Spiritual Healing-era of Death, meaning there’s a bevy of head-whipping rhythms and basic, but burly rhythms.

Glad to know there’s still a push for primitive death metal to combat all of the “kiddie” death metal that’s going down. Carnal Law makes a direct connection to death metal’s glory years and fits nice and snug alongside Autopsy’s recent reformation and the ongoing relevance of Suffocation and Obituary. Brutality through simplicity wins out every time. 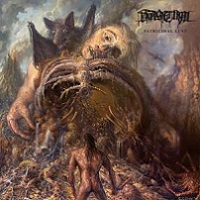