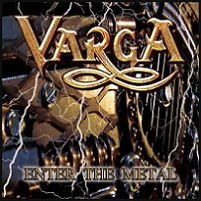 Another entry in the “Hey, we’re back after an extended layoff. My does the metal world appear different than we left it!” derby, Canada’s Varga maintained success for the better part of the 90’s in their homeland, having registered with their 1994 debut, Prototype. In the States they never flashed, but that’s okay – a lot of bands haven’t either. Anyway, the band dissolved in 1998, reformed in 2011, and now has plans to release two albums within a seven-month span, the first being Enter the Metal.

Easily falling under the tech-thrash banner, the band certainly isn’t lacking in chops, as evidenced by the whirling fingerboard action on opener “Beginning of the End,” which if our calculations are correct, is one of the most overused song titles in thrash. Never the matter, the band moves pretty swiftly through their riff sections, even if the songs here a bit long and sometimes, labored. Frankly, thrash was never meant to have elongated song structures, so if the Varga dudes would trim the fat, they might be in business.

The big knock is definitely the vocal and lyrical choices of Joe Varga, who finds it suitable to dish out unflattering topics such as Godzilla (“Gamera”), and Dr. Frankenstein (“Mad Scientist”), while hitching a ride on Annihilator’s “Stonewall” wagon with “No More Clean Air.” (And if we want to get precise, Godzilla is best sung about by Blue Oyster Cult, and Dr. Frankenstein is best left up to Helloween with “Dr Stein.” Small potatoes.)

What should be a highly-intelligent, heady thrash act, Varga is done in by their inane lyrical choices. It’s this type of hob-knobbing that makes all the warts on thrash appear all the more present, thus taking records like this down a few notches. Shame, for there’s some cool licks, playing, guitar-action, etc., to be found on Enter the Metal…