Valyria – Into the Dying of Time (Self-Released) 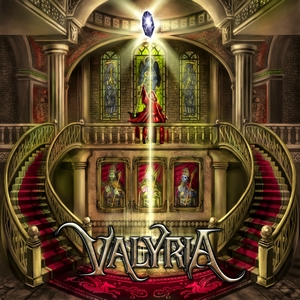 The blurring of power/progressive and melodic death metal is one that has been going on for quite some time now. It’s one that makes perfect sense, as it gives a heavier platform to ease some of the bombast associated with power/prog, and at the same, opens the doors to reaching more of the extreme audience. Valyria doesn’t break down any established barriers, but Into the Dying of Time is bound to be an enjoyable release if you dig the combination at hand.

Valyria tend to storm the gates with all they’ve got, and that’s a good quality have for this type of sound. There is a rather upfront keyboard feel much of the time, and they often share space with the guitars in terms of fronting the melodies. With 5 songs (and an intro/outro), the band has no time to lose, and the short length of just over 30-minutes allows for them to hit the gas with no regrets. One can hear it immediately with “Steel Inquisition,” where frantic riffing and drums mingle with both barked vocals and sung ones, which is what one will become familiar with quickly. They do provide seemingly just the right amount of heaviness (complete with low growls) to give the tracks an authentically heavy feel without losing their melodic edge. Sometimes these areas can hold bands back, but Valyria is on top of it with their songwriting. Intricate melodies that led into catchy choruses (and bring an immediate hook) play off each other well, and the 5-6 minute song length lets them toss in enough guitar heroics and vocal interplay to keep things fresh.

Full of ‘raise your fist’ type melodies and a solid combo of melody and aggression, Valyria make their mark with Into the Dying of Time. It does stick to the norms, but they are done quite well and should springboard the band into more unique waters as they progress. Plenty of appeal for both extreme and melodic fans.