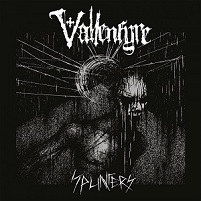 Album #2 from the Gregor Mackintosh (Paradise Lost) offshoot, Splinters finds Vallenfyre even more engaged in the feral, uncompromising sphere of crusty death metal. Trace back to Mackintosh’s origins and the ingredients are naturally there, like the sloth’d up rumble of Autopsy, and the heads-down approach of Discharge, who are probably the most notable influence mucking about. But regardless of where the ideas are coming from, Splinters has slightly more of a mature edge than its formidable A Fragile King predecessor, a feat that should not go unnoticed.

Joined again by notables such as drummer Adrian Erlandsson (At the Gates, The Haunted, Paradise Lost), and My Dying Bride guitarist Hamish Glencross, the unified front of these lads is apparent once the swells of opener “Scabs” get going. Leads are few and far between, yet Mackintosh’s contribution to “Scabs” is right out of the early 90s PL playbook, thus making it an instant highlight. The seven-minute-plus rumble of “Bereft” is also of note, where the surly death bellows of Mackintosh supply ample weight as a guitar tone from the depths (courtesy of in-demand producer Kurt Ballou of Converge fame) creates a torturous sonic arena. Elsewhere, the simplistic churn of “The Wolves of Sin” and reckless closing title track round out a running order without much time for pause or stagnation.

What was initially created as a way to cope with his father’s passing, Vallenfyre has emerged as a legitimate side-project for Mackintosh, who no doubt is usually tied up in the ever-enthralling throes of Paradise Lost. The nice thing about the band, and Splinters, is that the whole thing feels legitimate, an excellent companion to PL, and much more.