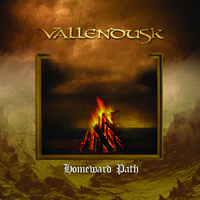 Jakarta, Indonesia’s Vallendusk made some pretty impressive noise for themselves upon their full-length debut in 2013 with Black Clouds Gathering. Indeed, there is a certain novelty to the band’s origins which can’t be ignored, yet their strong musicianship and undeniable craft as purveyors of epic black metal overshadows any prejudices held against the region whence they hail. Rightly so, too – for Vallendusk is far from a novelty act. A good band indeed, and now comes the second album in Homeward Path, which doesn’t move the needle more so than it further firms the band’s standing in the global metal scene.

After an inauspicious start, “Windswept Plain” finds its feet around the three minute mark, with the introduction of the melodic riffing that, all things considered, is the strongest area for the band. Tremolo picked guitar lines pick out the melodies, and are the vehicle that carries “Windswept Plain” as well as the rest. “Erath Serpents” interestingly takes a page from alt band Dredg, in the opening seconds’ drum work. All comparisons cease after that point, but the similarity is interesting. Lots of melodic twists ensue, but never diverge from the overall tone (in the song, as well as in the album as a whole).

Subsequent tracks “The Anchors” and “Eyes of the Watcher” blend into the overall woodwork of the record, while “The Wayfarers” and “Ring of Fire” bring a bit more urgency and darkness, and thus, stand out a bit more. On closer “Grains of Horizon” we finally see the vocals depart from their one-dimensional shackling and add a cleanly sung vocal chant, set against closed hi-hats that work nicely with the pagan vibes. A needed jolt to the vocal repertoire, it’s too bad this element is saved until the end of the album. One thing that jumps out is the use of organ across the album. An interesting choice in a genre where synths usually dominate in the keys department, Vallendusk certainly add their own flair in this regard.

Vallendusk excels in writing heroic guitar-forged melodies, yet the melodies (and songs) suffer a bit in the memorability department due to their lack of variety on Homeward Path. In all, an above average release of folk-inspired pagan black metal that will garner more listeners than it might have by itself, based on the band’s previous album’s success.